Science Exchange Co-Founder & CEO Elizabeth Iorns was one of the speakers during the first day of the StartUp Science conference today.

The mission of StartUp Science is catalyze the formation of teams, projects, and companies focused on positively transforming the infrastructure of modern science, and support the emergence of a new type of “science entrepreneur” […] to build novel solutions to difficult problems and bottlenecks affecting contemporary research. As a relatively new science entrepreneur working on positively transforming the scientific services infrastructure, Elizabeth used the opportunity to share her experience of transitioning from an academic scientist to a startup founder over the last year with a room full of people who are starting out on a similar journey.

Her ’10 Startup Lessons’ were nicely summarized in a series of tweets by Mendeley’s William Gunn (see below). 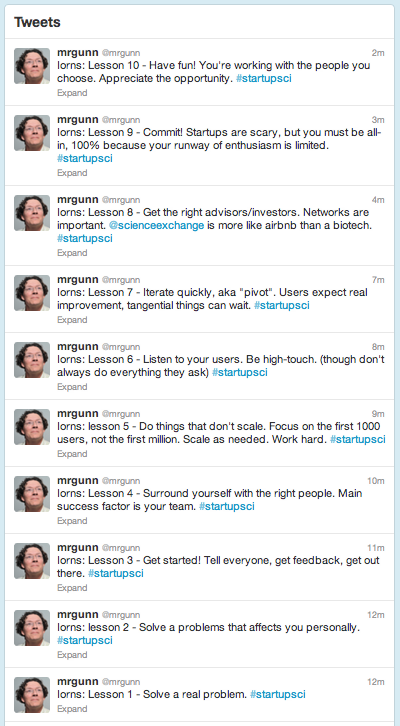 [about_box image=”http://thebenchapp.s3.amazonaws.com/wp-content/uploads/2012/03/DK-80.png”]Dan Knox is a Co-Founder of Science Exchange. Along with Elizabeth Iorns and Ryan Abbott, Dan created the initial version of Science Exchange and led the company’s successful seed fundraising efforts. Now, he looks after finance, legal, HR, marketing and customer support (and even commits the occasional line of code). Dan has MSc. in Economics from City University (London) and an MBA from the Massachusetts Institute of Technology Sloan School of Management.