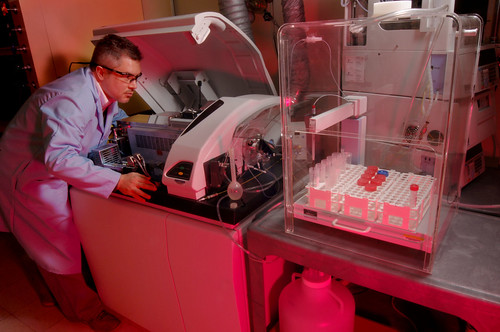 This is the third in a series of posts on scientific techniques, and how to use them in your research

ICP injects a liquid (a digested, dissolved, and usually diluted) sample into an argon plasma flame (~6000 K). The plasma is the source of positively charged ions, which are sent to an OES, AES, or MS detector, and concentration is determined onto a computer output. Samples must be digested, usually in nitric acid, so they can be effectively sprayed into the detector.

While most samples can be thoroughly digested with nitric acid (proteins, dendrimers, or other biological material), some nanoparticles are more difficult to digest. Since heavy molecules might be too heavy to reach the detector, not digesting particles fully can alter the results. Gold and platinum nanoparticles, for example, require digestion in aqua regia (1:3 concentrated nitric acid: concentrated hydrocholoric acid) for accurate ICP results. The method of digestion is usually included in the experimental section of publications.

ICP is especially useful because it is extremely sensitive (> ppb) and requires only trace amounts of sample. ICP is such a sensitive technique for low metal concentrations that care must be provided is sample preparation. Only Millipore or similar water should be used for dilution, and for digestion and dilution, trace metal grade nitric acid in plastic bottles should be used. Since glass can leach metals, only plastic bottles, spatulas, pipettes, and the like should be used. Any contact to metal can distort results, so samples should be properly digested to break down macromolecules and carefully prepared in metal-free environments.

There are no apparent pitfalls with ICP technology, but it is not very frequently used by inorganic chemists for characterization, where it could give as much data as elemental analysis in some cases. EA requires about 5 mg of sample, whereas ICP requires trace amounts.

Most metals can be tested, provided that a standard of that metal is evaluated prior to sample analysis. ICP can be used to determine trace amounts of one metal in a complex or test many metals on an unknown sample.

Other Use Cases for ICP

In my research on MRI Contrast Agents, I look for relaxivity (a parameter of efficiency) per metal ion. Gadolinium(III), with seven unpaired electrons, is most commonly used for MRI, so I tested a sample for overall relaxivity with a relaxometer, then used ICP to get the exact Gd(III) concentration. I then calculated the relaxivity per Gd ion in solution.

Another method of use for ICP is to get the loading onto a macromolecule. MRI Contrast Agents are more efficient with a larger molecular weight, so a common method utilized is to conjugate the small molecule Gd contrast agents to a macromolecule. Quantifying loading can be difficult, but if loading onto a silica particle or gold nanoparticle, a ratio can be determined of Gd in solution as compared to Si or Au and an approximate loading can be determined.

Most ICP instruments also have an autosampler, so many samples can be evaluated for many different metals without much supervision or time and effort on the part of the researcher. It is a very efficient technique for using a little sample to get a lot of data quickly.

If you want to order Inductively coupled plasma experiments for your own study, check out the facilities who offer the service on Science Exchange: scienceexchange.com/services/inductively-coupled-plasma-icp

[about_box image=”http://thebenchapp.s3.amazonaws.com/wp-content/uploads/2012/05/Piper-Klemm.png”]Piper J. Klemm (Twitter: @piperjklemm) is a Ph.D. Candidate in Chemistry at University of California, Berkeley, studying the next generation of MRI contrast agents in the laboratory of Professor Kenneth N. Raymond. She is also the National Social Media Coordinator for Iota Sigma Pi (the women’s honors society in chemistry), an Associate Language Editor for Molecular Imprinting (a Versita open-access journal), as well as being part of the Science Exchange Advocate program. She received her B.S. with Honors in Chemistry from Trinity College (Hartford, CT).[/about_box]