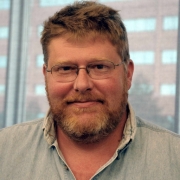 Who knew fat could be so interesting? Eric Hugo did. Eric is an adipose tissue researcher at the University of Cincinnati. His research on adipose cells spans the cellular biology world. From breast cancer to antipsychotic drugs, Eric studies how dopamine receptors on adipose tissue cells respond to things in the body.

I spoke with Eric recently about his research, its implications, and how he used Science Exchange. Read his story below:

Q: How long have you been doing research?

Eric: I got my PhD in 1992, but I’ve only been in adipose biology since 2002. I had been teaching for ten years and in 2002 I decided to return to research. So, I started a second post-doc ten years after my first. The person that hired me gave me a second chance, and I found that I really enjoyed being back in the lab. It’s worked out; I’m very proud of the twenty publications I’ve received.

Q: What do you research?

Eric: I have two major lines of research. My main research is in adipose tissue biology. I’m working on the direct effect of antipsychotic agents on adipose tissue. They were originally prescribed to treat schizophrenia, but some of these agents are now being prescribed to treat a number of different health issues things like bipolar syndrome, autism, even depression.

One of the side effects for many of these drugs is extreme weight gain. One has been known to cause very rapid weight gains of 10-40% of body weight – it’s a significant problem. It is now being given to children, and they seem to respond even more strongly to these side effects.  Additionally, some of these drugs cause serious metabolic side effects involving lipid and glucose control.

Our operational hypothesis is that part of the metabolic effect of these drugs is not due to a central nervous system response, but instead is a direct response of the fat cells. This is what I’m pursuing.

Q: How did you use Science Exchange?

Eric: I used Science Exchange to do cell line authentication on an immortal human fat cell line that I developed but has never been fingerprinted. We also had a number of cancer cell lines used on other projects that I wanted to be validated.

We worked with the RTSF Genomics Core Facility and the work was perfect for what we needed, I really couldn’t have asked for better service from both Science Exchange and the lab that did the typing. The prices were an order of magnitude better than some.

Q: Were there any surprises from the cell line that you had authenticated?

Eric: No, our cell line turned out to have the right XY compliments for what we do, so that was encouraging. Nothing weird, no unknown alleles, but it didn’t match anything in our database, which was also really good. Additionally, all of our cancer cell lines tested out to be what we thought they were.

Q: Why did you get your cell lines authenticated?

Eric: A number of journals and the NIH are requiring cell line authentication. Our next paper to go out using cell lines may need to go out soon, so I figured better to have the cell lines done ahead of time rather than run around like a headless chicken trying to get my lines authenticated.

Q: How would you have used Science Exchange earlier in your career?

Eric: I have always tried to maximize the value of my research dollars and Science Exchange certainly could have saved me a lot of leg work.  Additionally, I think a service like Science Exchange adds a competitive element to the supply side that might not have been there before.