Imagine telling the inventor of the radio that the technology he discovered was now found in almost every kitchen in America, and that you used it to make your popcorn last night. He’d probably be surprised, and maybe you are, too.  Sound far-fetched? Many aspects of modern life rely on technology that was first identified by 19th century physicists and then adapted to new applications. This not only includes microwave ovens from the example above, but state-of-the-art lab equipment which is poised to change the way researchers treat cancer. It might be hard to imagine cutting-edge discoveries in proteomics or precision medicine are the result of technology first conceived over a hundred years ago, but that’s what a new application called proteomic mass spectrometry imaging is doing for cancer diagnostic tests.

Many life scientists utilize research tools built on principles first explored and defined by physics, and mass spectrometry is a particularly impactful example. The technology we now use to measure mass-to-charge ratios of ions for the purpose of molecular analysis was first developed by J.J. Thomson on an instrument called a parabolic spectrograph in 1913. The spectrograph generated ions in gas discharge tubes, then passed the ions through parallel electric and magnetic fields. Subjecting the ions to these fields forced them to move in certain parabolic trajectories which would then be recorded on a photographic plate, as seen in the rather beautiful image below. 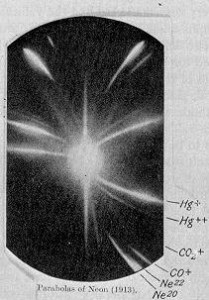 It was Thomson’s research at the end of the 19th century that lead to the discovery of the electron, work that eventually won him the Nobel Prize in physics in 1906. To hear a 77 year-old Thomson talk about that research (and how very small electrons are at around the 2:50 mark), watch this video filmed in 1934.

Besides the name change (there aren’t any spectrographs in labs these days), mass spectrometry has come a long way technologically. Advances by subsequent researchers made the technology more precise and the resulting output more accurate. In 1920 the first modern mass spectrometer was developed by Arthur Dempster, of uranium isotope fame, and by the 1970s scientists had begun experimenting with joining liquid chromatography techniques to the process. In 1989 the first LC-MS instrument was launched, securing it as a ubiquitous technique now in its third decade of use. The staying power of this technology is due to its versatility; it is able to directly analyze any biological molecule receptive to ionization. Scientists can use LC-MS to better understand the molecular structure of everything from wastewater to skin cream. The data collected during analysis can inform evaluation of product effectiveness, environmental toxins, or the function of a protein. For this reason it provides valuable research applications in environmental analysis, consumer products, agriculture, and in this case, precision medicine.

Now a bona fide buzzword, the concept of precision medicine was catapulted into the social vernacular in 2015 when President Obama announced the Precision Medicine Initiative in his State of the Union Address. In practice, precision medicine isn’t entirely new; physicians and researchers have long understood the importance of individualized factors in treating or diagnosing patients. The concept of blood type matching and bone marrow donation registries are both examples of precision medicine we have accepted as standard treatments. Advances in biotechnology are ushering in a new emphasis on specialized medicine and carry with it the hope of more effective diagnostics and treatments for ailments like cardiovascular disease and cancer. Much of this promise rests on discoveries being made in the field of proteomics, particularly about the role of proteins in healthy cells versus diseased cells. The form, function, and interaction of these proteins can indicate the presence of disease, identify molecular therapeutic targets, and help define molecular disease taxonomies for future research. Finding a measurable indicator for any of these biological states is called a biomarker, making it the focus of many proteomics and cancer researchers.

It turns out, a very familiar technology is proving to be the best tool for unlocking the largely unknown world of proteins. LC-MS breaks down the complicated protein structures from their three dimensional form, and then into even smaller units called peptides. The quantitative analysis of these peptides makes it possible for scientists to identify protein expression profiles associated with certain cancers. Clinically viable biomarker panels could greatly increase early detection and definitive disease identification in patients, both of which are known to improve patient survival rate. This specificity in diagnosis allows patients and physicians to be better informed when making treatment decisions by understanding the disease on a molecular level. Biomarkers can improve standard differential diagnosis descriptions, which up to now have largely included physical symptoms that manifest at later stages of disease development, like metastasis. Some diseases like malignant melanoma present in very cryptic ways, making them difficult to diagnose, even for highly trained dermatopathologists. Inconclusive biopsy results or histological features that are also found in non-cancerous moles complicate diagnosis and can lead to costly mistakes in the course of treatment for such a common and potentially deadly disease. According to the American Cancer Society over 10,000 people will die this year from the disease, making it the most lethal of all skin cancers. A collaborative research project between Yale scientists and Protea Biosciences is seeking to change that with a new diagnostic technology. In April of this year they announced exclusive licensing for a method which uses unique protein expression profiles to discern the presence of cancer. The results of the first clinical study were presented in 2015, showing 99 percent accuracy in identifying malignant melanoma and benign melanocytic nevi.

Achievements like this highlight the benefit of partnerships between academia and industry, which are becoming more common in many sectors of biotechnology. If precision medicine is to become a reality, it will have to tackle complex disease models that have historically confounded individual pharmaceutical companies or research labs. Open innovation between researchers on both sides advances scientific discovery and expedites successful clinical implementation of potentially life-saving drugs. As scientists work on more complicated human health issues, they will need to find collaborators who are best suited to solve the research objective at hand, while accessing novel technologies best suited for the job.

Just as the concept of precision medicine has expanded with scientific discoveries in biotechnology, the technique of mass spectrometry has evolved to address new research questions with advances in bioinformatics and lab technology. Deciphering the human proteome is still a ways off, but innovative techniques and research partnerships will surely have a role to play in unlocking the power of proteomics for human health. As LC-MS capabilities continue to improve, new disease diagnostics and treatments will be added to the arsenal of options available to physicians. The next time you hear about an advancement in precision medicine (or pop a bag of popcorn), thank a physicist.

Looking for a cutting-edge collaborator like Protea to help with your research project? Visit our marketplace to find the right provider for your mass spec analysis, or any of the thousands of experiment types we offer.