Sequencing the genomes of every individual kākāpō in the entire species 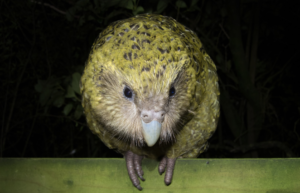 The kākāpō is a species of large, flightless, nocturnal, ground-dwelling parrot of the super-family Strigopoidea endemic to New Zealand. With only 154 living individuals remaining, it’s one of the world’s rarest birds.

Since early 2016, The Genetic Rescue Foundation, in partnership with The Department of Conservation (DOC), The University of Otago, Duke University, New Zealand Genomics Ltd (NZGL), Te Rūnanga o Ngāi Tahu, and Science Exchange, has funded and managed the effort to sequence the genomes of every individual in this quirky, critically endangered species.

The Genetic Rescue Foundation’s fundraising has come in the form of generous private donations, kākāpō DNA portrait sales and a successful crowdfunding campaign on Experiment.com.

Detailed genetic data for every individual in an entire species is a world first and represents a genomics-focused paradigm shift in modern conservation efforts. The possible discoveries that will come from this rich dataset are limitless. Scientists’ immediate efforts will be focused on finding genetic links to dwarfism, infertility and other diseases and conditions hampering kākāpō population recovery.

“Science Exchange has made completing this project possible. They’ve achieved that by providing The Genetic Rescue Foundation with unrivaled access to the world’s best scientific service providers and by stepping in to fund the remainder of the project. This data will steer kākāpō conservation decisions for years and decades to come. It may prove to be the deciding factor in saving this species.”