Science Exchange is in the media: share the news. 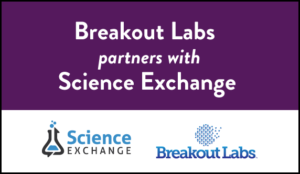 Palo Alto, CA – December 18, 2017 — Science Exchange, the world’s leading and most secure enterprise platform for outsourced research and development (R&D), today announced a strategic partnership with Breakout Labs, a fund within the Thiel Foundation that backs scientist-entrepreneurs working at the intersections of technology, biology, materials, and energy. The newly formed partnership allows for Breakout Labs to provide its portfolio companies’ scientists with on-demand access to a global network of research suppliers via the Science Exchange-powered private marketplace.

“Our companies are small innovative startups that, despite being cash-constrained, are at the forefront of radical scientific breakthroughs,” said Hemai Parthasarathy, Scientific Director of Breakout Labs.  “Science Exchange’s marketplace helps these companies adopt virtualization in their R&D process and give them an opportunity to access external resources they need to bring their innovations to market. Science Exchange fits into the ethos that prompted the formation of Breakout Labs by removing barriers for startups to access scientific services that will help accelerate their discoveries.”

“At Science Exchange, we are passionate about accelerating discovery by making connections — in this case, vital connections between scientist-entrepreneurs and experienced providers of scientific products and services,” said Elizabeth Iorns, Ph.D., co-founder and CEO of Science Exchange. “Through this partnership, the scientists at Breakout Labs’ companies, can now focus on what they do best, bringing game-changing scientific discoveries to market, and rely on us to find the best scientific providers to help them accomplish that.”

Breakout Labs is a revolving fund within the Thiel Foundation that supports early stage companies as they transition radical scientific advances out of the research lab and into the economy. The program backs bold scientists who work at the intersections of technology, biology, materials, and energy. More than capital, Breakout Labs provides additional support through a two-year program that includes introductions to follow-on funders, corporate partners and other resources to drive commercialization. To learn more, visit: www.breakoutlabs.org.